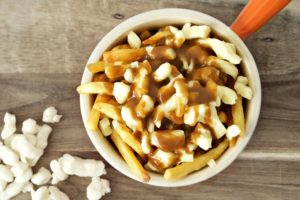 NH PoutineFest 2019 is almost upon us and the Franco-American Centre would like to provide you with the history of the decadence that is fries, gravy, and cheese curds.

Where did Poutine come from?

No one is sure where poutine originates but the traditional story says it was most likely from Warwick, Quebec. This was around the 1950’s at “Le Lutin qui rit”. Restaurant owner Fernand Lachance noticed that his customers would order a side of cheeses curds with their fries and gravy. When people asked him to put cheese curds with his fries he would respond, “Ça va faire une maudite poutine,” or, “That’s going to make a dreadful mess.”

This is just one version of the story. Another theory shows poutine coming from Drummondville, Quebec, but again no one is quite sure of the origin specifically. However, we do know that poutine did come from rural Quebec.

The people of Quebec were not as ecstatic to see their culture be “Canadized.’ Six years ago, Montreal chef Chuck Hughes told Toronto Life magazine that he’s “concerned” about how poutine has become known as a Canadian dish.

“It’s totally NOT a Canadian dish. It’s Québécois!” he said. This holds merit due to Quebec’s history of independence and being a distinct society.

The Canadian push to claim the dish has not ended, though.  As recently as 2012, Wendy’s pushed for a “Poutition” that Canada make poutine their national dish.

A Montreal researcher found that Poutine was a dish of lower class and a form of ridicule, then rose in popularity by foodies and the public. He called it the Rags to Riches trend. This was because poutine was also used to make fun of the Quebecois but has evolved to a Canadian delicacy, which is another point of controversy because poutine is not Canadian but is Quebecois.

Let me point out that the people of Quebec want you to enjoy poutine. They just want you to know where it really came from!

Poutine began selling in chains in Canada in about 1985. The chain it started in was called Frits. The company ended up folding in 1988. This led to other chains (like Wendy’s) picking up poutine as a dish and therefore enhancing its popularity. Canada even has poutine on the top 10 inventions from Canada above the electron microscope, the Blackberry cellphone, and the paint roller!

Today you can get you poutine with lobster, truffle oil, Italian Bolognese style, and even as cheeseburger poutine. You name it it’s out there! What do you think? Please share in the comments what you prefer!