Franco-American Centre
Legends and Monsters Across the World
May 26th, 2022 by Jasmin Grace

Behold, two monsters from across the francophone world. These legends hail from Québec and France, respectively. One is a village-eating turtle, and the other is a cursed cannibalistic monster.

Legend has it that in the Rhône river in Provence, France, there once lived a turtle. This was no ordinary turtle. The

people called it the Tarasque. Its body was like that of a dragon, and it had 6 legs. It breathed fire from its lion-like face. If that weren’t formidable enough, it also had an impenetrable shell and a whip-like tail. It terrorized the towns and villages, feasting on human flesh.

Until one day, a girl named Martha washed up on the shores in the South of France. Martha and those traveling with her were came from the Holy Land, and Martha was on a mission to preach Christianity. Martha explained her faith to the villagers, and they suggested if she could perform a miracle, they’d convert. Someone mentioned the Tarasque, that terrible turtle that kept eating their livestock and neighbors. So Martha tamed it, as good a miracle as any could hope for. The townspeople were amazed when she walked right up to it and wrapped her scarf around its neck, and led it through town. It didn’t breathe fire at all, or even try to eat anyone. Sadly for the Tarasque, it died shortly after its domestication because it wasn’t able to continue its usual diet of wayward travelers and unlucky fishermen. As for Martha, she became Saint Martha. 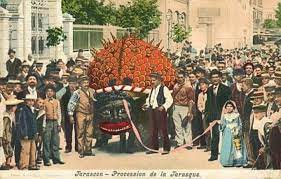 Saint Martha and the Tarasque

The legend of the wendigo belongs to the native peoples of modern day Québec, New England and the Great Lakes Region. A human became a wendigo when greed or harsh conditions weakened their spirit. Some say the wendigo 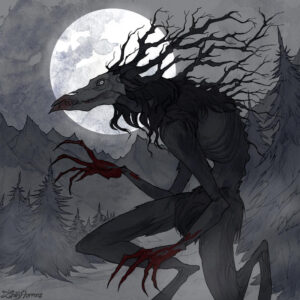 possessed new victims in their dreams, others say just being too near to a wendigo was enough to become one. A wendigo is cannibalistic; they prey on the weak and lonely. And a Wendigo is always hungry. Some stories claim the wendigo gets proportionally fatter the more it eats. Others say the wendigo is always so thin, you can see its skeleton under its ashy, mummy-like skin. The wendigo is sometimes portrayed with horns, antlers, or animal ears. Its eyes are either sunken and dark, or glow like dying coals. A Wendigo usually have superhuman abilities, and can move with the speed of the wind, and wade through deep snow, or even water, without sinking. Some say the Wendigo is mortal, a beast that can be killed. But others claim it must have its heart melted over an open fire in order to be truly eliminated.

Places where the Wendigo lives.

And there are so many other stories out there. But alas, one article only has room for so many beasts. Keep a look out for the next edition to this mini-series, which will feature the Loup-Garou, also from Québec, and Al-Ruhban of Algeria.