What is Armistice Day? 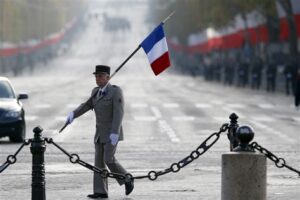 One-hundred and four years ago, a ceasefire to end the first World War was announced at 11am. The World War had raged for just over four years throughout Europe. On November 11th, 1918, an armistice was signed at the border of Germany and Northern France. This agreement, which began a ceasefire in the war, would ultimately be the first step towards the Treaty of Versailles. Since 1922, Armistice Day (Armistice de la Première Guerre mondiale) has been a national holiday in France. Other nations have similar celebrations under different names, such as Remembrance Day in the UK, or Veterans Day in the US. 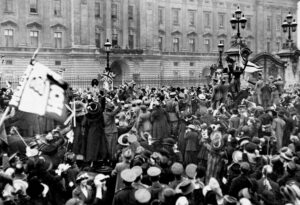 The first celebrations of Armistice Day were held in 1919 at Buckingham Palace. British monarch George V hosted French President Raymond Poincare at the palace to commemorate the anniversary of the armistice, and the event included a two-minute period of silence. Both leaders also made speeches celebrating those who fought in the war or lost family members to it. 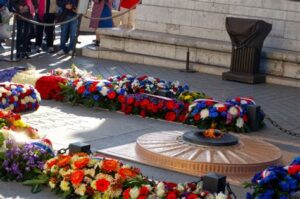 Throughout France, parades and activities are hosted on Armistice Day. Many cities and villages around the country host large community events to memorialize the losses of the war. People place wreaths, garlands, flowers, and other items on gravestones and memorials as well. As with La Toussaint, the most common flowers placed on graves are chrysanthemums. Speeches, services, and moments of silence are common also. Important figures frequently visit battlefields and locations of conflict throughout the day. 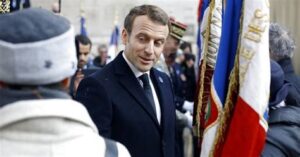 Every year, the French President visits a new battlefield or memorial in France on Armistice Day. This year, Macron plans to visit l’Arc de Triomphe, site of the Tomb of the Unknown Soldier,  for his annual commemoration.  The tomb was placed there in 1920 as a national event to remember those who hadn’t been identified after the war. This year, US Vice President Kamala Harris joined as an onlooker while Macaron laid a wreath on the Tomb of the Unknown Soldier.