The beginnings of the Cirque du Soleil show trace back to a 1980s group of performers. Founded by Gilles Ste-Croix, Les Echassiers de Baie-Saint-Paul (The Stiltwalkers of Baie-Saint-Paul) performed on the shores of the St. Lawrence River in Québec City. This group of jugglers, dancers, fire-breathers, and musicians would become the core of Cirque du Soleil. A member of this group, Guy Laliberté, proposed bringing the show out of the city and across the province of Québec. This province-wide tour began in 1984, marking the 450th year since the discovery of the Canadian land by Europeans. 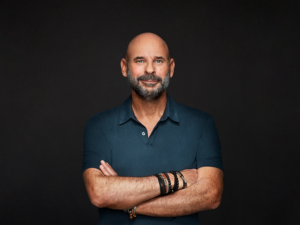 As the circus act began to spread, they found their name: Cirque du Soleil. According to Laliberté, the sun represented their youth, energy, and strength. They also became known as a trendsetting group, as their show was animal-free to avoid the typical cruelty associated with circus acts. Instead, they relied on incredible dance numbers, original music, and purposeful lighting to immerse the viewer.

Upon the success of this expansion, the act made its dive into international venues in 1987 with its first US-based tour, beginning in Los Angeles and moving to sold-out shows in San Diego and Santa Monica. Following this success, the same tour was brought abroad to Europe in 1990. In 1993, Cirque du Soleil established its first permanent show in Las Vegas. Titled Mystère, this show is performed in a custom-built theater on the Vegas strip, decorated with dazzling lights to match the aesthetic. To this day, the show still holds its residency in Las Vegas. The piece is designed to take a look “inside the imagination,” filled with color, music, and athleticism. Since its introduction, Mystère has become one of the top hits for any Vegas trip. 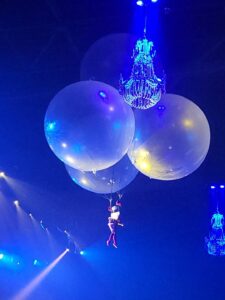 a performer floats above the audience, lifted by massive balloons

This weekend, Cirque du Soleil is making a stop in Manchester, New Hampshire, to play its show Corteo. On Friday, FAC blog interns Jasmine and myself attended the show at the SNHU arena.

Corteo, which is currently on tour across the US, focuses on the storyline of a clown named Mauro. In the beginning of the story, Mauro passes away, but his spirit remains a vital component of the piece. The rest of the show then focuses on his corteo, or funeral procession. The rest of the cast of characters can be seen having fun and celebrating the life of Mauro, rather than mourning his death.

Personally, the Cirque experience was absolutely amazing. From the audience engagement from the lady tied to balloons (pictured here) to the lights, dancing, and music all came together to produce an immersive and spectacular show.

Tickets for Corteo, and other Cirque du Soleil shows, can be found here.