The mission of the Franco-American Centre (FAC) is to celebrate the rich heritage of our French communities.  Through educational programs, cultural activities and social events, we promote French language, culture, and heritage in New Hampshire and beyond.

People of North-American French Heritage who speak French.  Whether early visitors from New France or more recent immigrants from Québec or the Acadian portions of the Atlantic Provinces, many people trace their ancestry to Canada. Those who grew up speaking French at home find a warm welcome greeting them at the FAC.

People of North-American French Heritage who speak limited or no French.  Although more than 20% of NH’s residents can claim French-Canadian heritage, the majority of that group do not speak French fluently. With many activities being offered in English, those who may not understand much French can still appreciate the culture and traditions that continue to add value to our communities.

People with heritage from other parts of the French-speaking world.  The face of French heritage is continuously evolving. Many of today’s new French-speaking immigrants come from La Francophonie – the 80+ countries that speak French as a first or second language. We welcome them as they bring new French-inspired cultures that enrich our understanding of the world.

The curious onlookers wondering “What is this ‘Joie de Vivre’ all about?”  “Joie de Vivre” means “Love of Life”. With so many aspects of French to celebrate, who wouldn’t want to explore the language, culture and heritage? The curious are welcomed; they often become members and always remain friends. 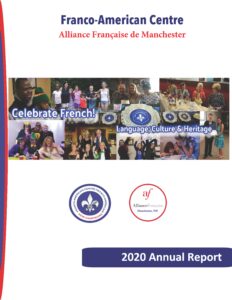 Bienvenue à tous / Welcome to all!