L’Arc de Triomphe is one of the most recognizable monuments in Paris. Originally inspired by Napoleon Bonaparte I at the height of his power, it has since stood as a monument to the past and present glory of France. And for 16 days last year, it stood for something different entirely.

After Napoleon’s victory at the Battle of Austerlitz, he commissioned the Arch to celebrate his miliraty’s accomplishments. Jean-François Thérèse Chalgrin designed it in the neoclassical style, and inspired by the Arch of Titus in the Roman Forum.  It would be built in the Place de l’Étoile,  a circle plaza with 12 large avenues radiating outwards to form an étoile (a star). Although the location of the Arch remains the same, the location is now called Place Charles de Gaulle.

Work began in 1806, on Napoleon’s birthday, August 15. By 1810, when Napoleon married Archduchess Marie-Louisean, only the foundation was complete. So for their wedding, a full-scale wood and painted canvas model was built on the site. This gave the archetest a chance to see how his creation would look in the Parisian setting, and he tweaked his original design just slightly. Just a year later, construction slowed, then stopped completely after the Bourbon Restoration of 1814. The arch sat unfinished for nearly a decade. King Louis XVIII, however, ordered work to resume following a successful invasion of Spain. The Arch was officially completed in 1836, under King Louis-Philippe.

Aside from periodic cleaning and maintenance, the Arch has remained unchanged for centuries. Until 2021, when an artist realized a vision after decades of dreaming. For 16 days, the Arch became an artist’s exhibition.

Artists Christo and Jeanne-Claude first had the idea to wrap the Arch in the 60s, while both lived in Paris. They created thought-provoking pieces in other parts of the world, but this project didn’t come to be until 2021, 11 years after Jeanne-Claude’s death. Christo didn’t live to see the project complete, and his devoted nephew completed the work.

The pandemic delayed construction, and breeding habits of falcons found to be nesting on the monument shifted the construction from 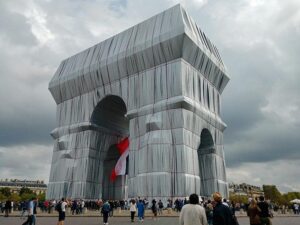 summer to fall. But after 3 months of labor by 1,200 workers, almost two miles of red cord, and thousands of square feet of silver-blue fabric, the project was complete. Mixed reviews greeted the finished work. Some thought it disgraced the monument, others didn’t understand and wondered if the ‘real’ art was under the wrapping. But some appreciated the perspectives this piece offers.

The wrapping on the arc can be interpreted as an analysis of the timeline of beauty. The Arc underneath had stood for centuries, its beauty remaining unchanged through the years. But the wrapping moved with every breeze, and the exhibition ended after only 16 days. If one were to look deeper into the meaning and inspiration of the piece, one might also analyze the meaning of the Arc itself. Napoleon built it as a tribute to the military glory of France, but what glory is there truly in war? If there was any glory, it didn’t last. Napoleon’s might faltered, and soon collapsed in on itself, giving way to a new order in France. Christo loved beauty, but he also loved deeper meaning in art.