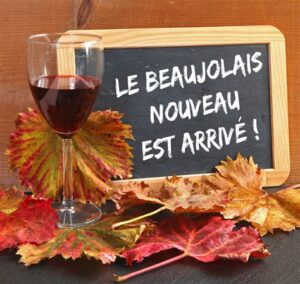 What is Beaujolais Nouveau Day?

Beaujolais Nouveau Day the third Thursday of November on the French calendar. Typically, the day is marked with fireworks, music, and festivals throughout the country. All of this celebration is in response to the first wine of the season, the Beaujolais Nouveau. The wine has become engraved in non-French cultures as well, making the tables of many American families for Thanksgiving (which falls exactly one week after the release of the wine) and acting as the cause of celebration in Wales, where bars are booked up to a year in advance for the release. 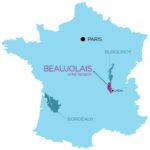 The Beaujolais region is home to Les Sarmentelles, the biggest celebration of Beaujolais Nouveau.  It is also where the Gamay grapes are produced, which will be fermented for roughly three weeks before the distribution of the wine begins. The grapes are mainly produced in the southern parts of Beaujolais, just north of Lyon. French law states that all grapes from this region have to be harvested by hand.

To make Beaujolais Nouveau wine, the winemaker (le viticulteur/ la viticultrice)  uses a distinct fermentation process that ferments the grapes for only three weeks. Wines fermented for such a short period of time are typically referred to as “young wines.” For the Beaujolais Nouveau, the wine is made using carbonic maceration, which emphasizes fruit flavors and does not extract the bitter tannins from the grape skins. The grapes are introduced to carbon dioxide in a fixed container, which is integrated into the uncrushed grapes and released into the wine as they are crushed. Once ready to be drunk, the wine is fresh, fruity, and low in tannins, but has a greater acidity than most red wines.

The Franco-American Centre hosts an annual Gala to celebrate the production of the Beaujolais Nouveau wine. This year, they plan to continue that tradition on November 20th, just two days after the wine goes up for official sale. The event is being held at Derryfield Country Club in Manchester, NH.  Want to join us?  Make sure to reserve by November 12th. For non-members, the cost is $100; for members, it is $90.

The event is marked by food and wine-tasting. A five-course meal will be served, with a wine perfectly paired to each course. For information about the menu, click the above image.  The 2021 Beaujolais Nouveau wine will make an appearance at the event, being paired with the main courses. Other activities at the gala will include a raffle, a silent auction, and music! 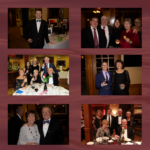