Everyone knows at least one of the classic fairy tales. Maybe it’s one of the more popular tales, like Sleeping Beauty or Cinderella, or a less famous one like Bluebeard. Perhaps you heard your tale as a bedtime story, or maybe you’ve seen Disney’s cartoon version of the tale. You may not have known the writer of these stories wasn’t Disney or Hans Christian Andersen or even the Brothers Grimm, but Frenchman Charles Perrault.

Perrault began his career as a lawyer and politician and became known for his writing later in life. He was part of L’Académie Française and heavily involved in the Ancients versus Moderns controversy. This 17th-century literary debate in France and England disputed the relevance of classical Greek and Roman writings to the modern era. The Ancients firmly believed classical writing was the exclusive standard for literature. The Moderns, inspired by recent scientific discoveries, believed in the evolution of literature. Perrault was a Modern in this debate.

Perrault eventually made peace with the Ancients. He wrote his fairy tales under his son’s name, or

even under the name Mother Goose, so he didn’t upset the Ancients again with his modern writing. He is credited as being the father of the entire fairy tale genre, although he didn’t invent many of the tales he wrote. Most were folktales with ancient origins, and he was the first to collect them and write them on paper. He also aimed these stories at children, telling them in a simplistic yet literary manner, demonstrating his principles as a modern. Neither of these things had been done before. He called this collection Contes de ma Mère L’oye (Tales of Mother Goose). Some of the most remembered stories in this collection include Little Red Riding Hood, Sleeping Beauty, Puss in Boots, and Cinderella. By writing these tales on paper, Perrault preserved the 17th-century version of these stories.

The story Cinderella, Cendrillon in French, is an excellent example of a tale that has evolved. It began as a simple rags to riches folktale, likely of Chinese or possibly Egyptian origins. Perrault’s version told of a beautiful and good young woman forced to live with her father’s new wife and her cruel daughters. She slept next to the fireplace and is perpetually covered in cinders, where she gets the nickname Cinderella. One day, the Prince of the region hosts a ball

and invites all the ladies so he might find himself a wife. The stepsisters are allowed to go, but tell Cinderella she has to stay home. Cinderella’s godmother takes pity on her and uses her magic wand to turn a pumpkin into a carriage, mice into horses, a rat into a driver, and lizards into footmen. She turns Cinderella’s rags and wooden shoes into a splendid ball gown and glass slippers. Then sends Cinderella to the ball with a warning to be back before midnight. At the ball, Cinderella catches the Prince’s eye, and they dance until the clock chimes midnight, and Cinderella runs away as her carriage turns back to a pumpkin, and her dress again becomes a dirty grey kirtle. The Prince throws another ball the next night, and again Cinderella dresses up her stepsisters but isn’t allowed to attend herself. So, her fairy godmother helps her out, and she gets to dance with the Prince once more. But this time, as she runs back home at the stroke of twelve, she’s in such a rush she leaves behind one of her slippers. No one at the ball knows who Cinderella is, so the next day the Prince takes the slipper to every maiden in the countryside to find his mysterious princess.

When he gets to Cinderella’s house, both stepsisters try on the slipper, but it’s too small for them. It’s jokingly suggested Cinderella tries on the slipper, and when she does, it fits perfectly. She shows everyone the other slipper, and the Prince recognizes her as his lovely princess. They get married, and live happily ever after, as king and queen. And because Cinderella is so good and forgiving, she invites her stepsisters to live in the castle.

It was Perrault who added the details of the magical godmother, the pumpkin carriage, and the glass slippers. The next step in the evolution of this tale was when the Brothers Grimm retold the tale in a darker and even more fantastical manner. In their version, the stepmother and stepsisters are crueler than the French version. When the Prince brings the slipper (gold, not glass, in their retelling) to their house, they are so desperate to make it fit, they cut off their toes. And instead of Cinderella inviting them to live in the castle with her happily ever after, she convinces crows to peck out their eyes, cursing them blind for their wickedness. The Brothers Grimm also made this story more fantastical; Cinderella can talk to the birds, and they help her when she needs it. 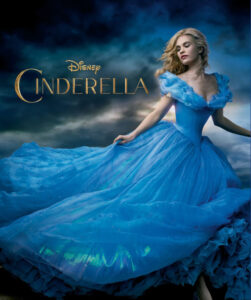 To bring this ancient story to a modern audience, Disney made it into a cartoon movie. The movie features the storyline closest to the Brothers Grimm version, but with much less darkness. The animals talk, there’s plenty of singing, and no one cuts off any toes.

None of these magnificent tales would have survived to the modern era if not for Perrault’s preservation and popularization of them, or if others hadn’t adapted them to fit audiences of different times. Today, these tales continue to evolve, with retellings through many lenses.