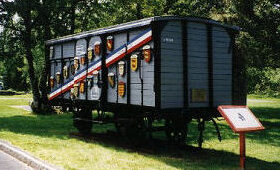 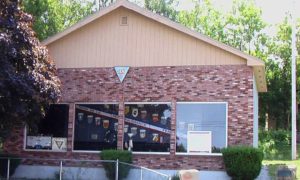 The Merci Train memorial event, free and open to all, is taking place Sunday, September 25th from 1 to 2 pm. at the Boxcar permanent location at Reed Street just off Bremer Street in Manchester, NH.

Following the presentation, there will be a free reception with food open to all attendees.  This will take place at Jutras Post (American Legion) located at 56 Boutwell Street in Manchester.

Registration to attend the reception is required by 5pm, Wednesday, September 21 to plan for food.

For more information about the Merci Box Car history, check out their website.

The Merci Train was a train of 49 French railroad box cars filled with tens of thousands of gifts of gratitude from at least that many individual French citizens showing their appreciation for the more than 700 American box cars of relief goods sent to them by (primarily) individual Americans in 1948.  Visit the exhibit to see New Hampshire’s Box Car!

Why does the Merci Train matter to Franco-Americans?

* More than 100,000 Franco-Americans served in the Armed Forces of the US during WWII.

*During WWII, Franco-Americans donated over $12 million for war bonds allowing them to name a number Liberty Ships in honor of famous Franco-Americans such as Ferdinand Gagnon, Aram Pothier, Bishop Albert Guertin, etc.

*Because of the propensity of Franco-Americans to have large families, FA newspapers published lists of families which had three or more children serving in WWII. The record in New England seems to have been the 10 Frédette brothers from East Braintree, MA; nationwide, the record was held by the 16 Gauthier brothers of Fort Worth, TX.

Thank you to historian and FAC friend, Ron Héroux for sharing these points from Armand Chartier’s book “The Franco-Americans of New England – A History”.

Bookings are closed for this event.