One man who dreams of telling his grandmother’s story is set to revolutionize Vietnamese music later this year. François Bibonne, a documentary filmmaker from France, has shot and produced a documentary for release next month. The documentary, titled Once Upon a Bridge in Vietnam, seeks to explore classical Vietnamese music throughout time and cement its legacy in history. Bibonne, who holds a master’s degree in Contemporary History, will combine his passions of classical music and film with his family history. Bibonne’s grandmother, a native of Vietnam, will help guide the film’s production. Throughout the later months of 2020, Bibonne traveled from village to village in Vietnam, learning everything about the unique music styles in each region.

Two important opera houses in Vietnam are crucial to the classical music scene: Ho Chi Minh City Opera House and the Hanoi Opera House. The opera house in Ho Chi Minh City, also known as the Opera de Saigon, hosts some of the biggest and influential artists and concerts each year. A few of the biggest pianists and violinists have played in the Opera de Saigon over the years. The Hanoi Opera House, or the Grand Opera House, is also home to many large concerts and events throughout the year. As the capital city of Vietnam, Hanoi is a bustling city with tons of cultural impact. A third, but much less significant, opera house is in Haiphong. While the city itself is a center for culture and industry in Vietnam, the opera house in Haiphong is nowhere near as influential as the others in the classical music scene in Vietnam. 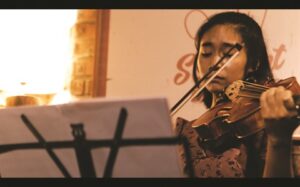 Despite French influences in many aspects of Vietnamese culture, their musical culture has remained independent of these French influences. “‘This idea of classical music is very different here, because in France… we have like

In an interview with a Vietnamese news outlet, François Bibonne recalls his time in Vietnam two years ago, listening to the “backdrop of classical music performed by the great ensembles of the country.” During this visit, he was first introduced to the nuances of classical Vietnamese music. “When I am with the musicians, we are all immersed in an atmosphere relaxed, unprofessional, a million miles from what we know about European classical music. It allows me to reexamine the role of professional musicians while watching them evolve. They all tell me that we play to be happy!” he continued.

Throughout the pandemic, Vietnamese musicians have been forced to cancel all live performances. As vaccine rollout

begins, albeit slowly, the music industry is opening up again. The “We Return” concert by the Vietnam National Symphony Orchestra (VNSO), performed in June 2020, served as the massive reintroduction of music culture back into Vietnamese life. Now, in August, Vietnamese classical music will reach a broader audience as Bibonne’s documentary releases.