Franco-American Centre
French All Around Us
September 18th, 2022 by Jasmin Grace 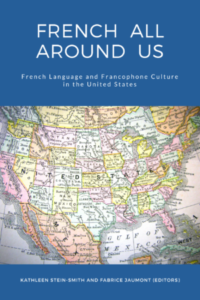 Last March, a collection of stories about the French language and Francophone culture in the U.S. was published. This book, titled French All Around Us, has contributions from nearly two dozen Francophone authors. Many of these contributors are well-connected with both the FAC and the Francophone culture at large in New Hampshire. A list of authors, and their short biographies, can be found here.

Since its publication, the book has already received critical success. Several figures have praised the book, including Phillipe Etienne, the Ambassador of France to the United States. Etienne said the book reflected “the reality of French and Francophone cultures in the United States.” Maine House of Representative Speaker Ryan Fecteau also commended the book. He says it serves as “a testament to the resilience of those who have preserved the language and traditions.” On Wednesday, September 28th, the FAC will be hosting eight contributors on this book at the Dana Center at Saint Anselm. The event is free to the public and will last from 7 pm to 9 pm. While attending this event, the authors will explain their pieces and the work as a whole. The panel seeks to connect with regional Francophones and share experiences and stories with them.