Humans have been using tools for centuries to make our lives easier. Many of the inventions we use every day, and even others we don’t often use, originated in France or were worked on by French inventors. 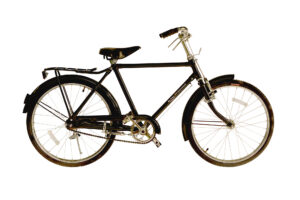 human-powered device a velocipede. Several inventors added to his original design, developing the first pedals for the front wheel. These French inventors were Pierre Lallement, Pierre Michaux, and Ernest Michaux. By this point, they called this wheeled contraption a bicycle, or a “bone shaker” because of its bumpy ride. Later, Eugène Meyer, also French, and James Starley, an Englishman, introduced an oversized front wheel for stability. This design was successful in the 1870s and ‘80s and introduced the bicycle to mainstream culture and racing. But the four-foot-high seat was too perilous for many to ride. So in 1885, John Kemp Starley (nephew of James Starley) made the ‘safety bike’ that more closely resembles the bike we know and love today. This model featured equal-sized wheels and a chain drive. Brakes and tires soon followed, bringing the bike’s evolution to the modern era. 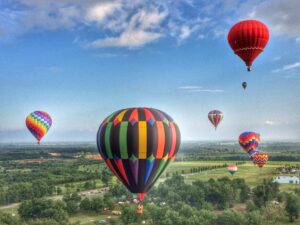 The first manned flight of a hot air balloon took place in 1783 in France. This early design was created by French brothers Joseph-Michael and Jacques-Ètienne Montgolfier. Hot air provides the lift that carries these balloons through the air, and this design was powered by various materials that were burned while the balloon was in flight. This was hazardous and made it hard to control the temperature of the air, and thus the altitude of the balloon. In 1960, American Ed Yost invented a propane-powered heating system to solve this problem. The first flight with this new design took place in 1960 in Nebraska. Then in 1963, Yost used his innovative balloon to cross the English Channel, proving that balloons could be a legitimate form of transportation. In 1987, Englishman Richard Branson and Swedish engineer Per Lindstrand were the first to cross the Atlantic in a balloon. They flew a stunning 3,000 miles in 30 hours, reaching speeds of 130 miles per hour.

Frenchman Sebastien Lenormand created the first functioning parachute in 1783. His design was based on the work 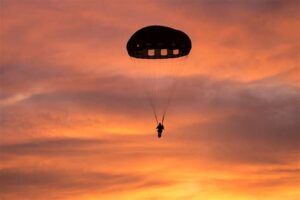 of European inventors before him, including a sketch by Leonardo da Vinci and Croatian Faust Vranic, who created an actual device from Da Vinci’s drawing. Vranic successfully jumped from a tower in Venice using his creation. All of these early parachutes had rigid frames. But in 1797, Frenchman André-Jacques Garnerin was the first to complete a jump with a more modern silk parachute that folded. Garnerin went on to refine his design and even shared his passion with his wife Genevieve Garnerin, who became the first woman to complete a jump with a parachute.

The catapult was a weapon of Roman legions and Greek armies, but the more complex trebuchet was invented in 12th century France for siege operations. The trebuchet is far superior to its predecessor — it could throw objects over 300 pounds, and had an accurate range of 350 yards. Using a sling to launch the missile instead of a solid bucket like in a catapult doubled the power of the launch. It was also incredibly accurate compared to the catapult because it had a guide chute that straightened the trajectory of the missile. Missiles were commonly rocks or infected corpses meant to spread disease among the besieged enemy. Some stories even tell of flaming oil and beehives that were launched by trebuchets. 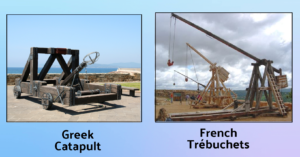 Braille is a tactile reading system used by the blind and visually impaired around the world every day. This ingenious system was invented by Louis Braille, who went completely blind after an accident at age three. Even though he couldn’t read like the other children, he went to school, learning by listening. He studied hard, and earned a scholarship to the National Institute for Blind Youth in Paris. While he was there, he learned about a 12-dot tactile communication system used by the military to send messages at night. This system had a good idea, but it was hard to learn, and was based on sounds instead of letters. From age 12 to 15, Louis studied and refined this system, turning it into something of his own. From this, he invented a simpler 6-dot system, then created a reading and writing system with 64 symbols.

In 1824, he presented this system to his peers at the National Institute for Blind Youth. It was very popular and made

learning much easier for the students. The school supported Louis’s system until they hired a new director in 1840. He banned the Braille system, fearing it would eliminate the need for seeing teachers. But Louis continued his work. He used an awl to make raised dots on paper, the same as the leatherworking tool that blinded him as a child. At age 20, Louis published a book about his system and how it could be used. He died of illness relatively young, and his brilliant system went unused for many years. Today, it has been adapted to many languages worldwide and plays an important role in the lives of many people who are visually impaired.

Each of these five inventions were created because there was a need for a new device. Things like the trebuchet are seldom used in the present day, but gave rise to more advanced technology that is still in use today. Other inventions like Braille and the bicycle are used daily around the world. Parachutes have become a valuable tool, and hot air balloons are still the most beautiful way to see the world from above.