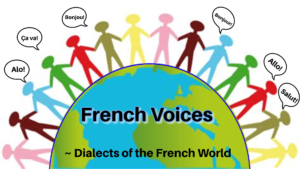 Thank you to Henri Vaillancourt, native French speaker and student of the language’s origins, for his insights which formed the basis of this blog.

While the Québécois dialect is perhaps the most well-known of the dialects of French, there are many more to be discovered, even in Canada alone. Through the period of colonization, the French took major stakes in Northern America. This established a sphere of influence over French culture and language around modern day southern Canada. However, the French introduced to the New World differed from the French spoken in France today. According to Henri Vaillancourt, who has a distinct passion for dialects, listening to Acadian and Québécois dialects is like a window into the past. This is because both dialects built on the older French dialects when France and Canada became isolated from each other.

In my interview with Henri, we discussed the Acadian dialect in great detail. Henri began with the history of Acadia: while the French were

settling into Canada and other parts of North America, they brought their language with them and eventually came to inhabit a region of Canada known as Acadie, or Acadia. Originally, the region only comprised Nova Scotia but grew to become bigger as the French influence spread. The remarkable fact of Acadia is the peacefulness the people had with the indigenous peoples of the area. The French settlers of this region were often found trading and socializing with these people, a stark contrast to much of North America. Later, the British rule of Canada forced the exile of all Acadians. In fact, they came to inhabit modern-day New Orleans in Louisiana, forming a bridge between the two dialects (the Cajun dialect will be discussed in a future edition of this series).

The Acadian dialect, which covers the region of Acadia in Eastern Canada, is another well-known French dialect in Canada. Acadia, the homeland of this dialect, is comprised of New Brunswick, Nova Scotia, Prince Edward Island, and even small pockets of the Gaspé peninsula. Henri noted these regions have distinct dialects, which all fall into the overarching category of Acadian dialects. Acadia has a similar history to Québec; it was first controlled by New France and later by the British monarchy. Thus, the region was cut off from the developments of French in Europe and maintained a fairly historical dialect of French, according to Henri. In this way, the Acadian dialect mirrored the Québécois dialect in several phrases, and words in Acadian are exchanged with English-speaking peoples living close. In fact, Brayon, a specific dialect of Acadian, mixes the Acadian and Québécois dialects.

Though it is in proximity to Québec, the Acadia dialect has a few distinctions. One of the more interesting distinctions is the first-person plural form of speaking. While there are two forms of French, like nous mangeons or on mange (both meaning “we are eating”), Acadian French introduces a third form. In Acadia, they use the first-person singular pronoun je and conjugate the verb for nous, resulting in something like je mangeons. Acadia was also special because it was mostly populated by Central French speakers, meaning some of their distinctions carried into Acadia. The most prominent example was the use of the “ou” vowel sound instead of “o” in words. For example, homme (man) in International French may become houmme in Acadian French. Pronunciation, particularly with “r” sounds, is also different in Acadian French. For example, “er” can often be pronounced as “ar” instead, changing the sound of many words, particularly verbs. “R” itself is also a bit different, being pronounced in the front of the mouth as opposed to the back, as in International French. The most distinctive feature is the use of point as a marker of negation. For example, one may say “je ne veux point ça” (I don’t want that) as opposed to the more common “je ne veux pas ça.”

Two sub-dialects in particular are unique to the Acadian group of dialects in this region of the world. The Chiac dialect is a mix of French in English where the two languages are mashed together to create phases. Another influence of the Chiac dialect is the Mi’kmaq language, which is an indigenous language from which words like matue (porcupine) were derived. Chiac is spoken mostly in south Canada, specifically in New Brunswick. There is debate about whether the spoken word of Chiac should be considered a dialect itself because the Chiac people combine French and English words. The most accepted idea is Chiac is just an accent of French common to New Brunswick. As such, Chiac is generally rated on a scale from heavy-Acadian to heavy-English. One common example of a Chiac line is from Lisa Leblanc, an Acadian songwriter: “J’ai du global warming dans la brain (I’ve got global warming on the brain).” The development of the Chiac mixture of French and English is due to the presence of Candian English in New Brunswick, which differs from Quèbec. French is dominant and thus impacted little, in comparison to Chiac, by the English language.

Brayon is another dialect of French that is found in New Brunswick, though it extends a bit farther than Chiac, and is often used about a group of dialects including Chiac. Brayon extends to border Canada and even extends into Northern Maine as well. The distinction Brayon has is that it is, essentially, a dialect of the Acadian group that mixes both the Acadian and Quèbècois dialects into one. Like Chiac, Brayon has some influence on the Candian English that surrounds it. However, this influence has not penetrated nearly as far as it has in the Chiac dialect discussed above. There has been some pushback to make Brayon its own group of dialects. But for now, it rests underneath the Acadian supergroup.

The Acadia region certainly has deep historic French roots. As a result, this led to the development of their own French dialect, one whichstems from old French (much like the Quèbècois Dialect) but still maintained a distinct identity. Acadian French is a vast category of dialects that actually contains many subdivisions of the dialect itself. Brayon and Chiac are some interesting examples Henri provided me to research. Much like the Quèbècois dialect, some speakers of Acadian dialects are ridiculed, especially those who chose to integrate English and French into their dialects. This is unfortunate, as each French dialect is just one of a dozen global voices of French, each with its own sound.