Check out the sites in this category to help you learn more!

The American-Canadian Genealogical Society (ACGS) is considered the leader in French-Canadian, Franco-American and Acadian Genealogy.  Its mission is to: 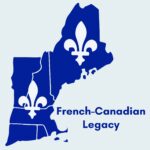 Hosted by Jesse Martineau and Mike Campbell, this Podcast is dedicated to celebrating the stories of the more than 2 million descendants of French-Canadian immigrants living in New England.

Dr. Patrick Lacroix, Historian, is a former Fulbright fellow and a former instructor at Phillips Exeter Academy. He has also taught at postsecondary institutions in New Hampshire, Quebec, and Nova Scotia.  As a scholar of U.S. religious history, Dr. Lacroix studies faith-based activism and its role in twentieth-century political realignments.

The Marquis de Lafayette, known to many Americans fondly as simply “Lafayette” was the rock star of his time, loved by Americans for his role working with George Washington during the American Revolution.  Want to learn more about Lafayette and his role in American history?  Check out these resources: