King cake, or three king’s cake, is a festive treat originally enjoyed by Europeans, most notably in France and Spain. Since then, New Orleans, Louisiana has become famous for their version of it. The area has left its mark on this dessert through the addition of a hidden surprise and by making the world’s largest king cake.

History of the Cake

In France around the 12th century, people began eating a round, decorated cake to celebrate a religious holiday. It was eaten from Epiphany (January 6th) through Fat Tuesday, or Mardi Gras. People knew it as king cake and ate it in celebration of the three kings who visited baby Jesus.

This king cake was different from king cake in today’s Louisiana. It would have been a decorated ring of dough eaten at home in the company of family.

From Old World Europe, king cake came to the Americas. Places in Latin America still enjoy a similar treat, which they know as rosca de reyes. But king cake really took root in New Orleans, and the city has become famous for it.

In September 2010, Haydels’ Bakery in New Orleans made the two biggest king cakes the world has ever seen. The largest of the two weighed 1,874.68 kilograms (over 4,000 pounds). Set up on hundreds of tables, each of the cakes completely encircled the Louisiana Superdome. They took three and a half days to prepare and nine hours to set up on site.

King cakes are known for having a surprise within them: a little plastic baby, intended to represent the baby Jesus. This tradition has origins that go back to Europe. Originally, whoever baked the cake would hide a bean, pea, or coin in the cake. Whoever discovered it in their slice would have good fortune for the coming year.

Folks in Louisiana added to the tradition, serving king cake at lavish balls. Whoever found the treasure in their slice would become King or Queen of the ball and would be responsible for hosting the party the following year. 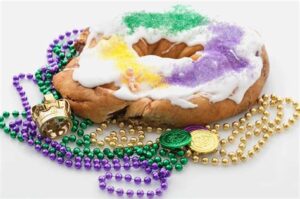 By the 1940s, most people were getting their king cakes from bakeries, not their own kitchens. The transition from little hidden treasures to plastic babies took place around this time, due to a chance encounter between a traveling salesman and a baker. The salesman had an abundance of miniature porcelain dolls and suggested to the baker that he use them for the hidden surprises in his king cake. This idea intrigued the baker, and after receiving permission from the health department, he began baking the dolls into his cakes. This transition was popular, and once the baker had run out of porcelain dolls, he found plastic ones that he began using instead.

Today, bakers usually leave these plastic babies out of the cake for baking, and the host hides them before serving. They come in a variety of realistic or festive colors and have become an essential part of the king cake tradition.