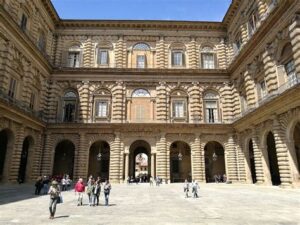 The Luxembourg Garden, Le Jardin du Luxembourg, is an iconic Parisian monument that boasts over 25 hectares of land. Within those 25 hectares (or about 62 acres) of land, the park hosts statues, fountains, tennis courts, flowerbeds, ponds, and even a theatre! The Luxembourg Garden is without a doubt among the most extravagant gardens in the modern world; designed to reflect the Palazzo Pitti of Florence, the gardens mark the luxurious lifestyle of the old French monarchy and elite class. Although designed to imitate Italian architecture and design, the French location has thoroughly impacted the aesthetics of the garden throughout the years.

When King Henri IV was assassinated in 1610, his wife, Marie de Midicis, ordered the construction of the Luxembourg Garden. Burdened by the memory of her husband, Marie de Midicis grew tired of the Louvre, which then acted as a palace for the monarchy, and desired a fresh start. Marie’s fresh start manifested as an entirely new palace: the Palais du Luxembourg. Surrounded by the now-famous Luxembourg Gardens, the palace and estate were designed to imitate the Palazzo Pitti, Marie’s childhood home. Completed in 1625, the original gardens were only eight hectares in size, but continued to expand until 1790. One of the lead gardeners on the job was Tommaso Francini, who designed two of the terraces along with the Palais du Luxembourg and constructed the Medici Fountain, the most famous fountain in the gardens. 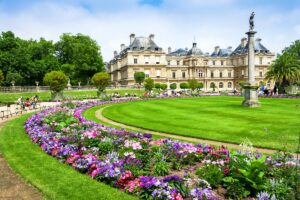 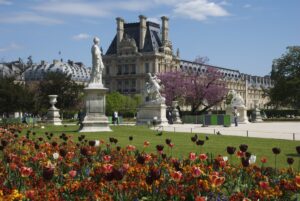 In 1630, additional purchases from the government expanded the size of the Luxembourg gardens . This expansion project was guided under the direction of Jacques Boyceau de la Barauderie. Baraduderies had previously worked on the gardens of Chateau Versailles and in the Tuileries Gardens. Imitating earlier French styles, Baraduderies created a system of geometric gardens and attractions. Perhaps the most notable of these was the octagonal fountain constructed in the center of the new gardens. To this day, children use this fountain for activities such as model boat racing. After these additions, the gardens were largely ignored throughout the reign of the next few monarchs. In 1780, King Louis XVIII sold some lands, about 10 acres, to pay for the restoration of the site. This land was later confiscated following the French Revolution and added to the gardens once more. 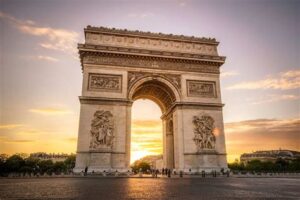 King Louis’ renovations were headed by the famous architect Jean Chalgrin, who was also an architect on the Arc de Triomphe. Chalgrin preserved the older French styles of architecture, even as he added new and increasingly modern elements to the gardens.  Many of the essential sites remained intact, including the nurseries and vineyards. Chalgrin added his own flair, of course, through elements like the addition of a path that lined the length of the garden, from the palace to the observatory. The original terraces are still intact today and line the main path in the Luxembourg Gardens. Statues began to adorn the paths of the gardens in 1848 after the fall of the July Monarchy in France. All of this would change, however, when Paris began to take a different direction under new leadership. 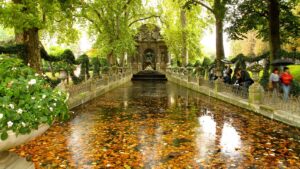 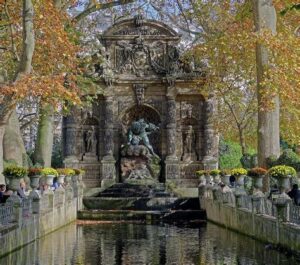 Under Napoleon III, the gardens were renovated once more. This time, to put roads through them. One road ran right over the Medici Fountain, which was taken down and reconstructed. To date, the Medici Fountain remains in this new location. Additions were made as well, specifically the ornamental gates and fences, a significant factor in the garden’s elegant aesthetic. These features were constructed by Gabriel Davioud, who had already overseen the construction of many statues throughout the city. Devious also designed the Pavillon Davioud, a brick garden house that strikingly resembled the English style at the time.

Once the garden’s many renovations were completed, the site became a harbor for preserving French culture. In particular, statues and models would find homes within the gardens, ranging from busts of famous politicians, poets, or philosophers to a model of the Statue of Liberty. This collection of French cultural hallmarks is ever-expanding. More recently, recreational additions have also been added, including tennis courts, basketball courts, playgrounds, etc. All of this has produced a site that truly exemplifies the Parisian beauty that we have all come to recognize.