The Statue of Liberty has become a symbol of freedom, democracy, and of America itself. But the statue wasn’t built here. It wasn’t even an American idea. The people of France sent it as a gift, and a symbol of friendship between the nations.

In the year 1865, the American Civil War was coming to an end, and the country was united once again. Across the Atlantic, French historian Édouard de Laboulange wanted to celebrate the expansion of freedom in America. His idea was to send a massive statue as a gift, and an enduring symbol of the Friendship between the two nations. 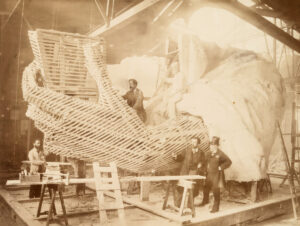 Construction of the Statue’s Hand

Frédéric-Auguste Bartholdi, a contemporary sculptor, created the statue. He used a technique known as repousse to create the ‘skin’ (exterior) of the statue. This technique involved hammering out massive sheets of copper by hand to create the desired shape. He named his creation ‘Statue of Liberty Enlightening the World’ although most of us today call it simply the Statue of Liberty. 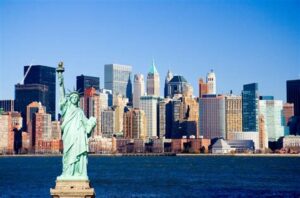 The skeletal support of the Statue fell to Alexandre-Gustave Eiffel, famed architect of the Eiffel Tower. He constructed this skeleton to move independently from the statue’s skin, which would be essential in windy New York harbor.

Eiffel and Bartholdi completed the statue in 1885, then disassembled it for the journey across the Atlantic. In nearly 200 different crates, it boarded the French frigate Isere. 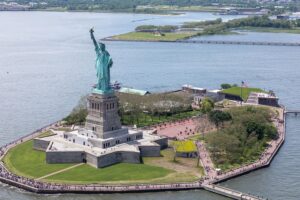 The Pedestal on Fort Wood

While the statue was being constructed in France, the pedestal was built in New York. Many helped to raise funds for this gigantic projects through contests, benefits, exhibitions, and other events.

Laborers built the Pedestal in the courtyard of Fort Wood. This fortress, built during the War of 1812, is on what would come to be known as Liberty Island.

In June, the Isere arrived and workers labored for four months to reassemble the statue. This iconic monument has stood tall on Liberty Island ever since.