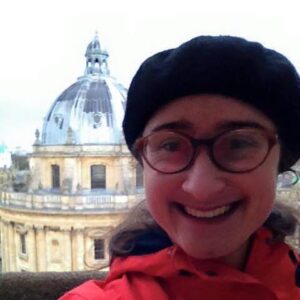 A cultural shift is taking place in New England amongst its former largest immigrant group: the French-Canadians. Once known as an isolated ethnic group, the descendants of French-Canadian immigrants are making a comeback by generating changes within their community to rekindle the culture while also remaining integrated into American society.

Emily with her parents and sisters.

According to Emily Murphy, a youth minister at Saint Christopher’s Parish in Nashua, New Hampshire, this resurgence is nothing short of significant. Throughout Murphy’s life, her French-Canadian heritage has shaped her into the person she is today by not only teaching her the religious values she holds but also showing her who she is as a French-Canadian in New England.

From the time Murphy was a child, her grandmother, or mémère, would often remind her to recite her prayers and be involved with the church. Murphy held those values dearly and says that her religion is significant to her as a French-Canadian, as well as influential to her close relationship with God.

Murphy is now living abroad in the United Kingdom as a member of the Ignite Team, a youth mission team for the Roman Catholic Diocese of East Anglia. This gives her the opportunity to work with other young adults to organize retreats and other faith-based experiences for children between the ages of five to eighteen across the diocese.

From being brought up in a French-Canadian family who acknowledged and celebrated their cultural heritage, Murphy recalls the traditions her family handed down, such as speaking French during Christmas and birthdays. She also remembers that although her mémère did not enjoy cooking, she did teach Murphy several traditional French-Canadian games to preserve another piece of her heritage.

“Most French-Canadians I’ve met equate their culture with folk music and home cooking – memories of playing the spoons or mixing the batter for a sugar pie,” Murphy explains. “My Mémère was tone-deaf and her best meal was Kraft mac-n-cheese. So I never got all those traditions. She did love to play games, though, and I learned pichenotte, ‘pack-a-voler,’ and ‘kee-eye’ from her.”

Murphy looked up to her mémère and saw her as a critical piece of the family structure. She says that she most admires how the women are revered in French-Canadian culture.

“The best part about growing up French-Canadian was the witness of strong women. Every matante [aunt] and mémère that I knew was a strong personality, the person in charge of the whole household, including their husbands,” she says.

“Granted, I only knew this generation of women once their husbands had retired,” Murphy adds. “From what I saw, a man’s role was to earn money for the family, but when they got home or retired, they only got a rocking chair. Women were the ones who raised the children, kept up relationships, entertained, and ran the house overall, and the men respected that. There was a demarcation of roles, but no subjugation. Neither party thought they were better than the other.”

Now, Murphy is excited for the next generation of Americans with French-Canadian heritage and is hopeful that they will pick up the many traditions that were handed down to reignite the passion for their culture throughout New England.

“I’d say there is a growing recognition of being French-Canadian or Franco-American, of realizing that a good number of other kids in school also grew up with a mémère and pépère. I’m not sure the culture as a whole is growing much, but there’s definitely a pride in being French-Canadian that’s resurrecting after a generation or two of being ashamed of it,” Murphy says.

In her own words, Murphy was never ashamed of being French-Canadian but explains that it was easier to avoid the 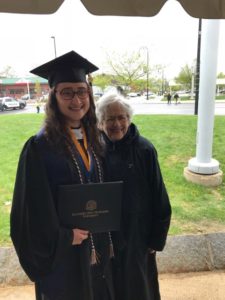 Emily with her Mémère

recognition from using cultural words. Rather than saying “matante,” she used the more well-known term, “aunt,” during her time in school to skip the explanation.

“When people would talk about their heritage, I would say I was French-Canadian, but I didn’t have the same clearly ethnic traditions as the Italians or the Hispanics. I would just mention my funny words and the games I learned from Mémère,” she says.

However, there has been a feeling of shame in the older generation of French-Canadians in New England due to the community losing their cultural pride while attempting to assimilate with the dominant American culture.

“My mother’s family stopped speaking French in the home in her generation. Her older siblings were teased at school for pronouncing certain words ‘the French way,’ so they simply refused to speak anything but English. I imagine similar things happened in other families, where French was stigmatized or marginalized, and teenagers trying to fit in dropped it from use,” Murphy says.

When French-Canadian immigrants arrived in New England during the 19th and 20th centuries, they were known for their stubbornness in remaining faithful to their cultural traditions and language, causing them to isolate themselves from other groups and create communities of “Little Canadas.”

“The French-Canadian community was self-contained for many generations, but as they moved up the economic ladder, they mingled more with mainstream America, and the French-Canadian language and traditions were seen as a barrier to assimilation and fitting in. Now that the community is more or less fully assimilated, there’s no need to feel ashamed of the remnants of the heritage. They become unique quirks that people can be proud of,” Murphy explains.

Although Murphy believes that the French-Canadian cultural traditions and language will never come back in full force, she is excited for the next generation to pick up parts of the culture and learn more about themselves.

“Evolving means we become better versions of ourselves. However, I hope the core tenets of family loyalty, stubbornness, faith, and self-sufficiency will continue in some form,” Murphy says.