On February 3rd, 1949, a 40-boxcar train sailed into New York Harbor. Why would a train travel by boat? Well, this train had come across the Atlantic from France. It was a thank-you gift from the people of France. 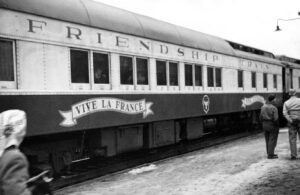 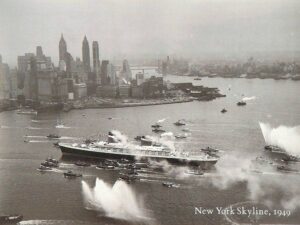 A couple of years earlier, America had sent over 700 train cars to France in an effort to provide relief from World War II. Individuals who simply wanted to help out sent the majority of these items, not large organizations. This ‘American Friendship Train’ sent nearly $40 million in relief.

Origins of the Merci Train 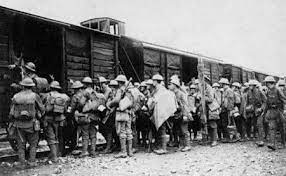 Andre Picard, a veteran of the war and a rail worker, originally had the idea of sending a thank-you gift to the US. He envisioned sending a boxcar loaded with gifts. His idea was very popular, and gained a great deal of support. Soon, a national organization had taken over the project. They would still send boxcars of gifts, but instead of one car, they wanted to send one to each of the then-49 states, plus a car to be shared between the DC area and the Territory of Hawaii. And it would be called the Merci Train. 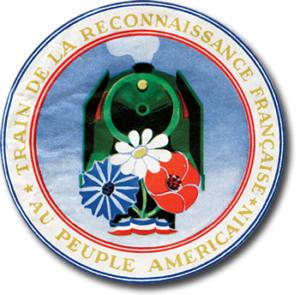 Symbol of the Merci Train

The cars were just about antiques by the time they arrived in the States. This type of car was called hommes 40-chevaux 8. It was the same kind of car used to transport soldiers during WW1. Though very cramped, it could hold 40 men (40 hommes) or 8 horses (8 chevaux).
Symbols of each French province decorated every car, along with a plaque holding the symbol of the Merci Train. This symbol featured poppies, reminiscent of Flanders Fields, among other flowers and a train engine. 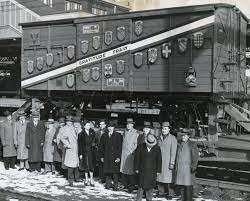 Many of the Merci Train’s cars are still around. The states that received them still cherish them. New Hampshire’s car lives in Manchester to this day. On September 25th at 1pm, there will be a memorial event on Reed Street in honor of the car.