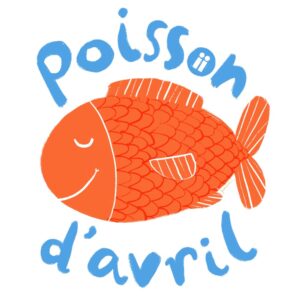 In the United States, we celebrate the first of April as April Fool’s. It is fondly celebrated as a day of pranks and jokes among friends. In 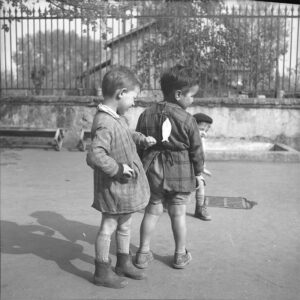 France, as well as Belgium and Quebec, the first day of April is Poisson d’Avril, or ‘Fish of April.’ On this holiday, children and adults alike celebrate by “coller un poisson dans le dos de quelqu’un.” This means literally “to stick a fish in someone’s back,” and is usually done by taping a fish to someone’s back without that person realizing, at least not right away.

When that person does find the fish minutes, or maybe hours, later, the person who put it there shouts “Poisson d’Avril!“

Why a fish? There are several theories, but no one is certain exactly what the origins of this fun holiday are. A popular theory is that this holiday began just following a switch of calendars in France. Some claim it has to do with the fishing seasons, and still others speculate that this is a very ancient holiday, with roots going back to celebrations long ago.

A New date for New Year’s

In the 16th century, King Charles IX wanted to unify the calendar system of France, and put the Gregorian calendar to use throughout the kingdom. Now New Year’s is on January first.

News traveled slowly back then, and some continued to welcome the New Year in March. Others protested the change in calendars, and refused to celebrate in January. Regardless of their reasons, those who didn’t observe the change were ridiculed by those who had switched over. People considered those who celebrated New Years in March to be fools, and ridiculed them and played pranks. Perhaps the fish came into play when people gave these fools fake fish to mock the end of Lent, a fasting period where fish is the only meat allowed to be eaten.

The Season for Fishing and Ancient Holidays

Fishing season in France ends in March, as the fish breed in April. During this period, it was impossible to get fish. Some wonder if the first Poisson d’Avril was when someone sent another, more naive someone to the market for fish, knowing that they would be impossible to find.

Or perhaps the fish element of Poisson d’Avril comes from the fish as an early symbol of Christianity.

One of the more obscure elements of this holiday are the postcards. These have fallen out of fashion today, but in the late 19th century and early 20th century, people would send postcards to their friends and relatives for Poisson d’Avril.

These cards were comical, cute, and featured fish, of course! Some also included clever little insults, meant to amuse the recipient.

Regardless of where it came from, this holiday is a lot of fun to celebrate. One can find versions of this holiday all around the world. In France, Belgium and Quebec, it is known as Poisson d’Avril, and in anglophone places it’s called April fools. Although there, the holiday lacks any relation to fish.