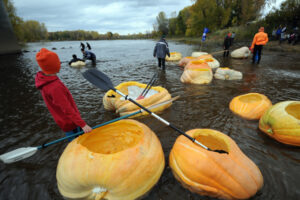 In the fall, if you were to visit the Béancour river in Québec, you might see a bunch of carved out pumpkin canoes race downriver. Don’t worry, this isn’t  a warped fairy tale; this happens every year.  These pumpkin canoes are all part of the Gentilly Pumpkin Regatta. 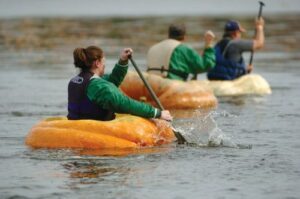 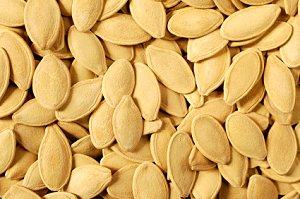 Contestants receive pumpkin seeds in April, and must grow their own gargantuan gourds. The goal is to grow the biggest pumpkin by weight. After judges weigh each pumpkin, their growers hollow them out into giant floating boats.

This competition is called a potirothon. The word itself is a mix of marathon (a 26.2 mile running race) and potiron (French for pumpkin). A word mix such as this is called a portmanteau.

All Kinds of Veggie Competitions

Canoe pumpkin races, although they may sound ridiculous, exist beyond the event in Gentilly. The Windsor Pumpkin Regatta is a huge competition in Nova Scotia, which takes place on Lake Pesaquid every fall. 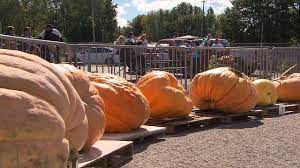 The biggest-ever pumpkin canoe weighed in at 919 pounds. That’s as much as a small cow! It paddled 15.09 miles, according to Guinness World Records.

Additionally, pumpkins aren’t the only thing people compete to grow into ridiculous sizes. People from all over compete to grow giant vegetables, and few of them end up as canoes. Check out this article by the Guardian about the growers of these huge veggies.