Origins of the Catacombs

Dug by the Romans and expanded later by the French, the tunnels beneath Paris supplied limestone to the city. By the 18th century, they were becoming unstable. Officials shut the tunnels down in 1776. A collapse of one of the tunnels destroyed an entire street. 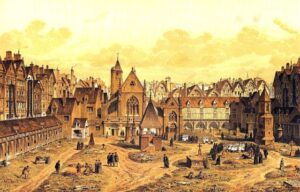 At the same time, the city had another problem: it’s graveyards were full. By 1763, burial within city limits was illegal. However, that didn’t fix the cemeteries that were already overflowing. Les Innocents became a particular issue in 1780. Extreme rain that year caused one of the cemetery walls to collapse, and bodies tumbled into the street. Louis XVI shut down the graveyard permanently. Before that, it had been a burial site for ten centuries.

With two major problems in the city, officials decided to solve both at once. The bones from Les Innocents and other cemeteries were dug up and dumped into the tunnels.

Working at night, workers moved the skeletal remains of seven million people beneath the city. Some bones were over twelve hundred years old. 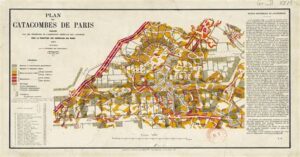 Map of the Catacombs

Thury took it upon himself to renovate the tunnels beneath Paris. He rearranged the bones that had been dumped into the tunnels and added some of the decorations from ground-level graveyards in the city. He made intricate patterns from the different bones in a variety of styles, back-filling the space behind his designs with more bones. His arrangements provided more support to the tunnels.

The tunnels were completely off limits to the public. However, after the creation of the mausoleum in 1809, authorities permitted some tours. These underground excursions weren’t open to the public, they were an exclusive experience for the elite. About four trips visited the catacombs each year. Today, the catacombs are open to all, and have become a major tourist attraction.

Historical accounts tell us that the victims of the guillotine during the French Revolution came to rest in the  catacombs. Architects of the Reign of Terror, such as Maximilien de Robespierre, lay beside their aristocratic victims. However, a recent discovery has put that story into question. 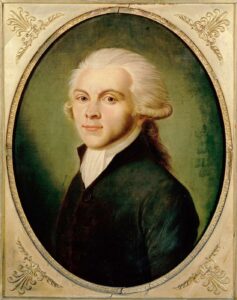 Four cemeteries, among them Old Madeleine cemetery, were built for les guillotinés (victims of the guillotine). Old Madeleine was officially closed in 1794, because, like the rest of the cemeteries, it was full. This is when it was believed that les guillotinés were moved to the catacombs. Later, the Chapelle Expiatoire was built on the site of Old Madeleine to honor Louis XVI and Marie Antoinette. However, Louis XVIII had them re-interred at the Saint-Denis Basilica, the traditional resting place of French Royalty.

Aymeric Periguet de Stouz, the current administrator of the Chapel, made the discovery. He found hints in letters from Louis XVIII, which led him to discover anomalies in the construction of the walls between the lower columns of the Chapel.

Stouz called in an archeologist. He inserted a camera between a gap in the stones of the walls. This was less invasive than an excavation, which would have damaged the structure. As Stouz had suspected, the hollow space was full. They held wooden boxes filled with earth and human bones.

Further investigations into this intriguing discovery will take place in coming years. Until then, we can only speculate where the final resting place might be for les guillotinés.

The catacombs of Paris hold many secrets. Filled with ancient bones and shadows, they will continue to be a place of mystery beneath the city of lights. 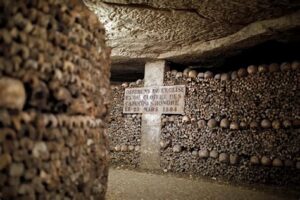