Franco-American Centre
Who is The French-Canadian Legacy Podcast
November 25th, 2019 by Nathalie

At one time in New England, French-Canadians were the largest immigrant group crossing the northern border from Quebec to find work in the mills. During this time, they faced many challenges in their new homeland from discrimination to low wages, but their dedication to living a better life helped them overcome and adapt to American life without completely losing their culture.

Nowadays, however, a lot has changed among the descendants of these immigrants. Attendance in the Catholic church, once a French-Canadian stronghold, has gone down dramatically. Gone are the days of entire families speaking French and passing the language down to their children, who now only speak English. What little French that managed to survive over the years lives in simple terms such as “mémère” and “pépère,” to just name a few, literally.

Although becoming Americanized is a large part of becoming American, keeping cultural traditions and language alive is essential in ensuring future generations the story of where their family roots began.

In order to remedy this issue and bring up the conversation about the future of French-Canadian and Franco-American culture, Manchester native Jesse Martineau decided to start a podcast about this very topic.

Martineau acts as host of The French-Canadian Legacy Podcast, currently a two-man passion project between Martineau and Mike Campbell, who produces the show and handles other aspects such as the podcast’s social media accounts.

Both Martineau and Campbell have a French-Canadian background that they knew about growing up, but through creating the podcast, they say that there’s so much more to learn about the language and culture. 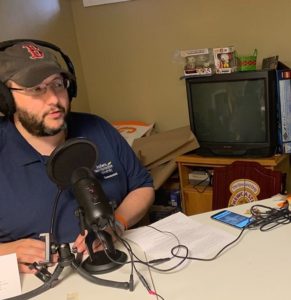 Campbell is French-Canadian on his mother’s side and says that the most he remembers about the culture being a part of his upbringing in Laconia, New Hampshire was his mother and grandmother, or mémère, speaking to each other in French.

“My mom and her would speak French when they got mad at us, or at me or my dad,” he laughs.

Campbell remembers pork pie being served on the holidays, a French-Canadian legacy in and of itself, although at the time, he did not realize how distinct the dish was in relation to the culture.

“We had pork pie during holidays, but I didn’t really know it was a cultural thing, I just assumed that was just something my family did,” he says.

From his college days of being involved with TV production, Campbell had the technical background that Martineau needed for the podcast to take off. Altogether, he edits the audio for each podcast episode, posts the show online to their social media accounts which includes YouTube, Instagram, Facebook, and Twitter, writes a blurb for their WordPress site each week, and sets up the preview episodes to give listeners a glimpse into the next week’s episode.

Campbell met Martineau through mutual friends and learned of his interest in starting a podcast. With his past in producing video, Campbell wanted to get back into editing and help his friend with the technical work. Through the process, he has also learned a lot about his French-Canadian heritage that never stood out to him before.

“As we go along and interview, I’m learning more and more about all of this stuff that I grew up with, what a lot of other people grew up with. It wasn’t just me, so it’s been interesting working with it and learning this whole new side of me and getting to edit,” Campbell says.

Martineau had tried to start a podcast the year prior, but was unfamiliar with editing and had to drop his solo project. When Campbell decided to team up with him, the podcast was back on and the first official episode was released in March 2019. The show was recorded in Concord, New Hampshire at the public television station, Concord TV, but has since been moved to Campbell’s basement. 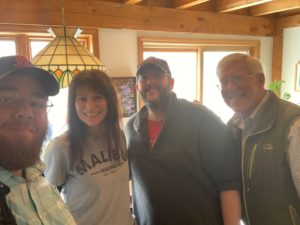 Mike and Jesse with Podcast guests.

The podcast focuses on the two million descendants of French-Canadians living in New England today and aims to rekindle the French presence that has struggled to keep up with being noticed amongst other cultural groups.

“We’re still very much here,” Martineau says in regards to the French-Canadian presence, which has been described by some as a quiet existence from the lack of French language and holidays in American culture.

Martineau became inspired in revitalizing French-Canadian culture in New England while talking to a coworker about the visible presence of other cultural groups such as the Irish, Italians, and Greeks. He was left wondering why the descendants of French-Canadians no longer have the close cultural ties that these other groups have kept in high regard over the years. 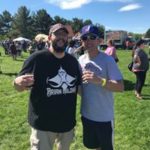 He says from there, his coworker, Dan Beaulieu, connected Martineau with his brother, Tim Beaulieu, who was involved with the Franco-American Centre in Manchester. Beaulieu is also the mastermind behind Poutine Fest, an event held every summer that gives local restaurants the chance to share their poutine recipes with event-goers. The event has become very popular and can show others that French-Canadian and Franco-American culture can once again bring people together.

One major change Martineau has noticed in his own life is his childhood Catholic church, St. George’s, changing from a place of worship to a storage facility for the Palace Theatre. The closing of the church bothered him because it was another piece of French-Canadian heritage fading away in New England.

He has also noticed the culture in Manchester has changed a great deal, from the disappearance of the neighborhood’s “Little Canadas” to hearing French being spoken less often.

“The west side of Manchester was very much known as the French side. There was a joke that you needed a passport to cross the river because it was such a different place. But it’s not so much anymore,” Martineau says.

Manchester was once home to eight French churches, which was seen as a lot for one area at the time. However, now there is only one church, St. Anthony’s, that still holds Catholic Mass in French every Sunday.

There are still pockets of French-Canadian culture and language in Manchester, but the presence is not as prominent as it was back in the day. Martineau frequents a small breakfast and lunch joint, Chez Vachon, where you can sometimes hear French being spoken by other patrons.

Martineau says it’s good to know there is still interest in the culture from learning about the fans of the podcast, with many of them listening in from the United States and even Québec. It turns out that the long-lost cousins up north are fascinated about learning exactly where those one million Québec immigrants ran off to and how they shaped New England.

During the summer, two listeners from Drummondville, Québec traveled down to Manchester, New Hampshire to meet Martineau and Campbell. The husband and wife were fascinated by the stories from the podcast and decided to set up a meeting with the host and producer. 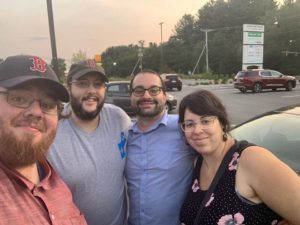 Mike and Jesse with fans!

“They found the podcast, they thought it was awesome, they were way into it, and they used their vacation time to come to Manchester because they wanted to connect with me and Mike [Campbell] and see what we were about down here,” Martineau says.

The man from Drummondville now Skypes with Martineau and is teaching him how to speak French.

Connecting with fans of the podcast up north has been an honor for the team and inspiration to continue telling the stories of French-Canadians. Martineau also recalls someone reaching out from Trois-Rivières, Québec, saying how important the podcast is and encouraging them to keep it up.

When the podcast was in its earlier stages, one story really stood out to Martineau and Campbell and made them realize the impact of the podcast and just how quickly it spread to other parts of Québec.

“Somebody from the Franco-American Centre was taking a tour of a historic observatory in Québec City and the person giving the tour started talking with her about where they were from and she said she was from New Hampshire, and then the observatory tour guide asked if she was familiar with our podcast,” Martineau recalls. “That’s awesome that somebody in Québec knows what we’re doing here.” 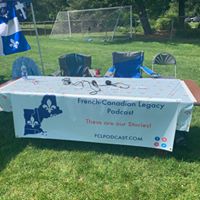 Set up for remote podcast at 2018 NHPoutineFest

According to Martineau, for French-Canadians in Québec, the story of the one million people that left for New England is an interesting one, especially how these immigrants remembered where they came from and continued speaking French and keeping cultural traditions for quite some time.

Martineau and Campbell hope that The French-Canadian Legacy Podcast will inspire the younger generation to learn about their forgotten heritage and learn more about themselves and their history.

It’s become a challenge to balance out French-Canadian heritage and Americanization, although Martineau says that it’s not a time of mourning but rather a time to be a part of something and learn what being an American of French-Canadian descent truly means for the future of the culture in New England.