FAC members & friends extend sympathy and solidarity to our afflicted Haitian friends and to the Haitian-American communities who are concerned for their affected relatives and contacts on the island.

Many organizations are working to aid the Haitian recovery effort. For those looking to make a donation, consider these organizations:

Haiti on the Island of Hispaniola

Mountains dominate the western third of the island of Hispaniola in the Caribbean and hold island valleys, plains, and plateaus. In this tropical landscape lies the nation of Haiti. It is home to incredible people with a unique culture and boasts an impressive history.

Hispaniola was originally home to the Taíno kingdom before the arrival of Europeans. The Spanish came first and the French joined them. They soon began to fight, and in 1697 Spain gave France the western third of the island. The French turned this land into the colony of Saint Dominique and shipped in African slaves to work the sugarcane and coffee fields. This colony became the wealthiest in the French Empire in the 18th century.

By 1791, the slaves who had done all the labor to gain that wealth were tired of their predicament and revolted. They took control of the northern part of the colony and went to war with their former masters. In 1804, they beat the French and gained their independence. They renamed their new nation Haiti, which would become the second oldest republic in the western hemisphere.

Because of the mixture of native, African, and French influences, modern Haiti is home to a unique culture. Creole and French are the nation’s official languages, and most of the country’s literature is in one of these tongues. Most writers are part of the intellectual elite, so literature often contains leftover French influences. The subject of this literature often relates to the political turmoil or hurricane disasters Haiti has experienced.

In contrast, the art of Haiti is bright, cleverly humorous, and innovative. Commonly featured on canvas are stunning local landscapes or cultures. Art is often themed or tied to indigenous or African traditions, cultural aspects, or religion. 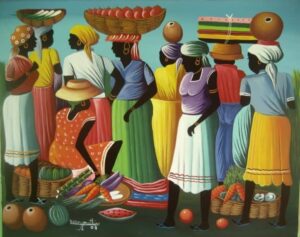 Another marvelous art in Haiti is the cuisine. As with most other things in Haiti, it is a blend of different cultures and influences. Staples include beans and rice, as well as tropical fruits. Chicken, beef, and goat are common proteins. Foods are often simple, but spicy, with a twist of bold flavors. Some popular dishes include tchaka, a squash and meat stew, and riz national, a rice dish with beans, vegetables, and sometimes fish.

Although the nation of Haiti has experienced conflict over the years from various sources, it is a beautiful place, geographically and culturally, with a complex history. 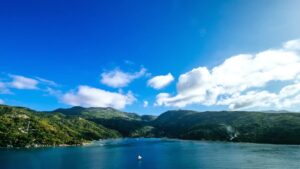