Perhaps the most well-known region of Francophone culture and identity within the United States is New Orleans, Louisiana (NOLA). Many consider the city as an epicenter of French culture and language, stemming from their history as a colony of France. Now, New Orleans serves as the home of vibrant festivals such as Mardi Gras which highlight the city’s cultural heritage. This week, myself and my friend and blog co-author Jasmine Grace will be visiting this lively city for the annual Association of Teacher of French (AATF) Conference. Here, we will be doing a presentation about our experiences learning French. Here are some of the most exciting Francophone pit stops we are planning to make! If you would like to follow along on our journey, check out facnh_official on Instagram. 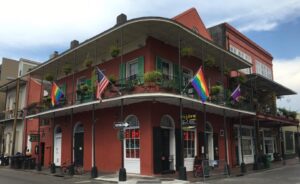 The French Quarter, also called the “Carré Vieux,” is perhaps the most defining feature of New Orleans. Around the world, this half-square mile of land is among the most easily identifiable. The quarter lies along the banks of the Mississippi River. In 1718, the area was selected for its access to the river and other local water sources while remaining relatively high in comparison to the surrounding swamplands. 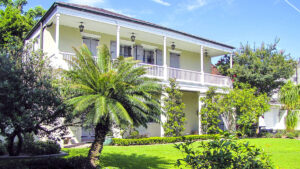 Because of this location, however, hurricanes and other natural disasters have constantly wreaked havoc on the neighborhood. In addition to this, the old colonial buildings were mostly made of wood, which caused them to decay in the damp surroundings. Only one historical French building remains, the 1750 Ursuline Convent. The famous “lacy” appearance of the 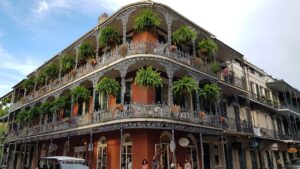 French Quarter came about from Victorian-era building and the financial benefits of cast iron. As time went on, the French Quarter retained its old-timey feel but newer, more modern suburbs began to pop up around it, creating the large New Orleans metropolis that we know today. 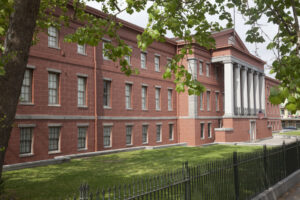 Jazz was born within the boundaries of New Orleans. Over time, it has become a defining feature of their history and diverse culture. Music, and jazz in particular, brought together people around the city from across lines of race and heritage. Many of the most prominent artists in jazz were African-Americans and it marked one of the first major cultural movements to include African-American citizens. Louis Armostrong, one of the most notable trumpeters of the jazz era, was from New Orleans! Archives detailing the journey of jazz, past and present,  fill this multilingual museum. Today brass marching bands line the streets of New Orleans and fill the air with jazz. 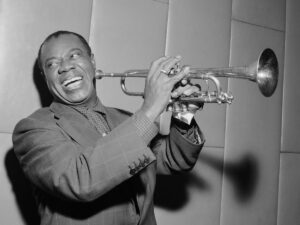 French teachers host the AATF conference annually in cities around the world. It gives teachers and students of French the ability to connect with each other and share experiences, tactics, or just facilitate discussions about the classroom. Jasmine and I will be presenting about our own experiences with the language of French beyond classroom. We are ecstatic to have this opportunity to share our own thoughts on how to expand a student’s access to French outside the classroom!

Make sure you check out @facnh_official on Instagram all week to follow us along on our journey!